How many animals represented in the Chinese zodiac cycle can you name? There are heaps of clues scattered throughout this post, and you’ll be able to glean their total number from the title of OwlCrate Jr’s July book pick. You’ll find the answer at the end of this post.

Hint: the zebra’s not one of them. It’s just to showcase what’s possible with the brilliant origami kit that came included in the Zodiac Adventure box. 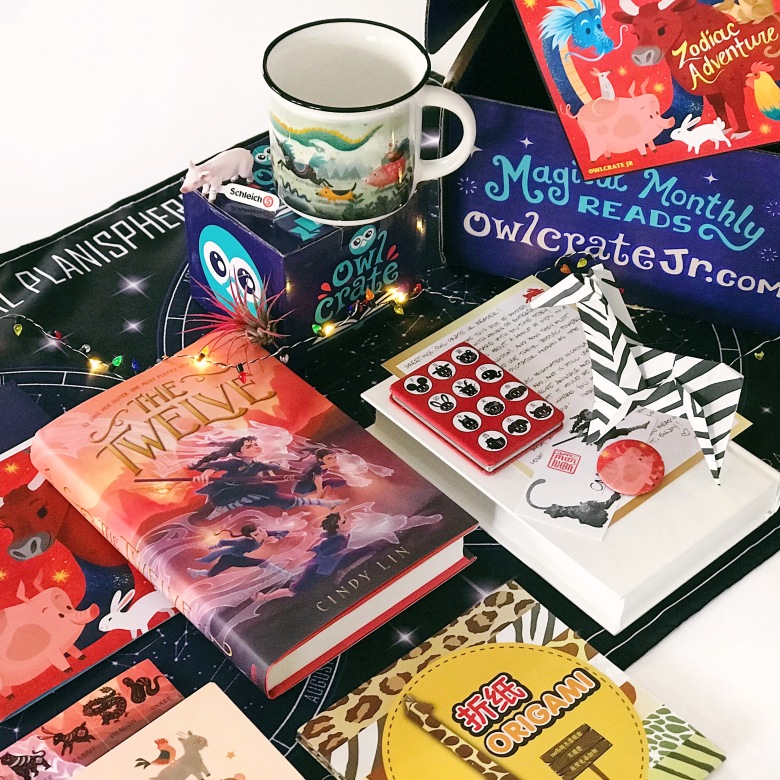 🐒July’s book of the month: The Twelve by Cindy Lin is the start of a new own voices fantasy series, and brimming with action and adventure. Usagi, our strong female protagonist, has to channel her zodiac powers, sniff out danger, battle ferocious villains, and try to protect her family. Each hardcover came with a signed bookplate and a letter from the author, plus a foldable paper fan.

🐖A @schleichofficial animal figurine of a Chinese zodiac animal. Every box came with either a pig, dog, tiger, rooster, rabbit, or a goat. Mine came with a pig!

🐇A fully stocked origami kit with animal print paper and instructions on how to make various animals.

🐕A zodiac pocket mirror inspired by a special item featured in the book.

🐐A sticker sheet of all twelve Zodiac animals designed by @veepdoodles!

🐉OwlCrateJr’s monthly magazine designed by @themichellegray, featuring an interview with the author, the story of the Chinese zodiac, and a tutorial on how to make an origami rabbit (as inspired by the main character in the book).

Thinking about getting in on that middle-grade awesomeness? Now’s the time! Use my code MARA15 and save a whopping 15% off your first OwlCrate Jr box.

Usagi can hear a squirrel’s heartbeat from a mile away and soar over treetops in one giant leap. She was born in the year of the wood rabbit, and it’s given her extraordinary zodiac gifts. But ever since the mysterious, vicious Dragonlord hunted down her parents and all those with zodiac powers, Usagi has been very careful to keep hers—and those of her rambunctious little sister, Uma—a secret.

But when Uma grows too bold with her powers, she is captured by the Dragonguard. Usagi barely escapes, and does so only with the help of the mysterious Heirs of the Twelve, a mystical group of skilled warriors who once protected the land.

As new mysteries unfold, Usagi must decide who she stands with and who she trusts, as she takes on deadly foes on her path to the elusive, dangerous Dragonlord himself.

Curious and curiouser. How many zodiac animals did you spot or were you already able to name?

There are twelve animals in total, each one assigned to a specific year of the Chinese zodiac cycle — or shengxiao (/shnng-sshyao/ ‘born resembling’) — with one such zodiac cycle stretching across twelves years. The twelve animals (or, eleven animals and one mythical creature) are the rat, ox, tiger, rabbit, dragon, snake, horse, goat, monkey, rooster, dog, and pig.

Curious as to which animal represents your Chinese zodiac sign? Here’s a link.